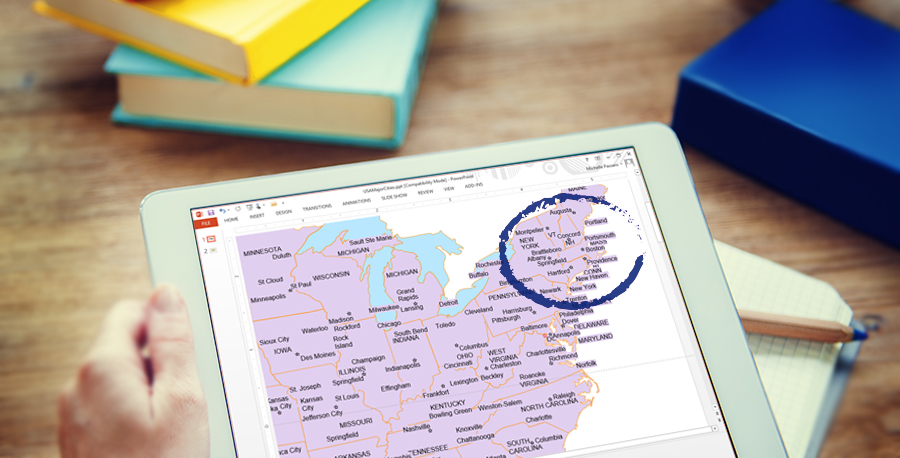 Focusing on a few top partners will get results, but it may keep you from reaching your maximum channel sales potential.

If you’re a channel chief, a channel manager, or a sales manager, try this exercise to see if you’re truly getting the most out of your indirect sales teams. All you need is a map, a pen or a pencil, and some scrap paper. Alternatively, you can capture an image of a map and use digital drawing tools, but you’ll still need paper to do the math (sorry, math is involved).

While vendors – and their account managers – want to maximize channel performance, many often default to a handful of definable partners within any given territory. This happens even when there are more partners through which to transact business. The reason is simple: It’s easier to manage fewer partners – particularly when they enable you to reach your goals – than it is to try herding dozens or hundreds of them.

This exercise demonstrates a key channel-management dilemma. High-performing partners will always self-identify because their sales and revenue productivity will outshine everyone else’s. As a result, account managers will shower them with attention, budget against them, and, assuming performance is consistent, see the desired results.

Here’s the dilemma. While individual account managers in this scenario may reach their objectives, the company might not. Or growth may languish at a low rate, even if the overall results are positive.

The desire for more indirect sales and accelerated growth often leads vendors to embark on recruitment campaigns, believing they need more partners or, better yet, the “right” ones that can deliver results. But it’s quite likely that there are more than enough partners inside that circle you drew to satisfy all of your sales and growth needs.

This is where the math comes in.

If you assume that the number of authorized partners – active and inactive – inside your circle is at least three times the number you listed off the top of your head, the number of end-user accounts under your channel umbrella potentially scores higher. The average partner has 35 to 75 active accounts. The total number of accounts – active and inactive – is roughly 250 per partner. If there are 30 partners inside your circle, and each one has 50 active customers, the total number of potentially untouched accounts is 1,500. If each of those accounts spends $50,000 on technology, the total addressable market (TAM) is $75 million.

A lot of assumptions go into this back-of-the-envelope exercise, but the point is sound as the Law of Big Numbers applies: A large number divided results in another large number. Even if this number is just a quarter of the estimated TAM, the circle’s potential sales volume is still $18.8 million.

This isn’t to say that an account manager should go after all 30, or however many, partners. It’s a starting point for understanding the untapped potential within each territory. No two partners have the same capabilities or performance potential. This exercise forms the foundation of a broader assessment of partners that enables account managers to look beyond their top performers for new opportunities – often at a lower cost and higher return.

The 2112 Group provides assessment, mapping, and enablement services that allow vendors and their account managers to uncover opportunities that reside just beyond their fingertips, resulting in growth through existing partner stock. It’s far more effective – in terms of both money and time – to expand with existing partners than to recruit and operationalize new partners. We can help show you and your teams the way.

Some account managers will say that it’s far easier and more profitable to focus just on their top three to five partners. Yes, they’ll get results and retire their quotas. Their success, though, comes with the cost of surrendering the potential of the rest of the partners in their territories.

Larry Walsh is the founder, CEO and chief analyst of The 2112 Group. You can reach him by email: lmwalsh@the2112group.com; or follow him on social media channels: Twitter, Facebook, LinkedIn.