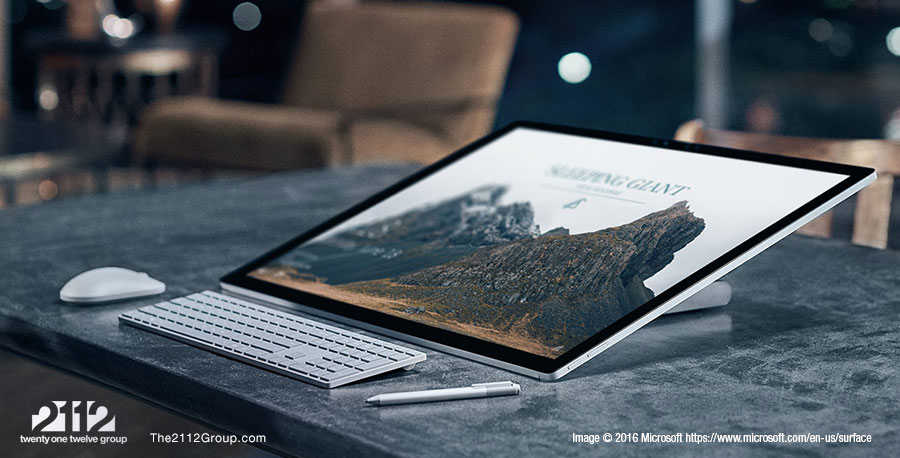 The PC is alive and well, and Microsoft’s latest offering might just make these ‘lowly’ devices profitable once again.

If the $3,000 unit works as impressively as it looks, Microsoft may have a hit on its hands. The 28-inch, high-resolution touch-interface desktop has a hinge that allows users to lower the screen and work by hand easily and comfortably. And the Surface Dial, a puck-like device, adds a new dimension to the interface, enabling users to do a variety of specific tasks, such as navigating around an image, and giving creative types a newfangled type of paint palette.

Microsoft is riding high again, thanks in large part to surging sales of its Azure cloud services, Dynamics enterprise software, and Office 365 productivity subscriptions. What’s more, Surface – the once-struggling tablet – is now the darling of the mobile segment, as sales of the slate and notebook continue to expand. Surface Studio is a natural extension.

Many people will focus on the elegance, style, and function of the Surface Studio. Comparisons to Apple’s Mac workstations are already littering the digital landscape. It’s the price point that captured my attention. Starting at $3,000, the Surface Studio isn’t cheap. Assuming it performs as advertised, it’s likely worth every penny.

[ctt tweet=”Consumers will pay a premium for Windows computers that have form & function.” coverup=”3UFA4″]

Have PC manufacturers finally figured out that individuals and businesses will pay a premium for Windows computers provided they have form and function?

For years, Apple sat on the sidelines with minor market share. While Windows-based machines dominated the landscape, Apple remained content owning niches such as creative services and education. The Mac platform is easy to use and requires little maintenance. Windows machines were all business, and their bulk reflected that.

Now, every PC manufacturer has a premium product. While they offer machines at every price point to capture business, they’re increasingly shifting attention to products in the higher value bands. Microsoft’s Surface Book and Surface Studio are the latest examples, but Hewlett-Packard’s Envy, Dell’s XPS, Lenovo’s X-1 Carbon, Samsung’s 7 Series, and Toshiba’s Portégé are pushing the envelope when it comes to style and functionality.

Despite assertions to the contrary, the PC isn’t going anywhere soon. Despite all of the advances in mobility, cloud computing, Big Data, and the Internet of Things (IoT), the lowly PC remains the cornerstone of interaction. Without PCs, gaining the benefits of those other technologies is impossible.

The problem is that economics work against PC manufacturers and resellers. In the early PC days, machines were sold for a premium because they were new. Vendors could continue to lower prices amid rising competition as innovations and technology advancements squeezed out cost. The PC segment began suffering when the price points got so low that any incremental cost reduction didn’t result in a perceivable difference in profit.

Pivoting to premium products and profits can return some of that margin to the PC, making it a viable profit-generating product once again. In the past, Microsoft justified development and marketing of the Surface as a catalyst for showing other PC manufacturers the potential of the Windows platform. Microsoft may just show its manufacturing partners how to push the profit envelope.

By extension, Microsoft’s foray into premium PCs may show how the market will respond to premium pricing. The technology market spent years chasing the lowest price band to attach maximum sales. What the Surface Studio may show is that clunky technologies can have higher intrinsic value and command higher prices and margin. This idea applies to hardware, software, and services, and translates across the value chain – manufacturing, distribution, and resellers.