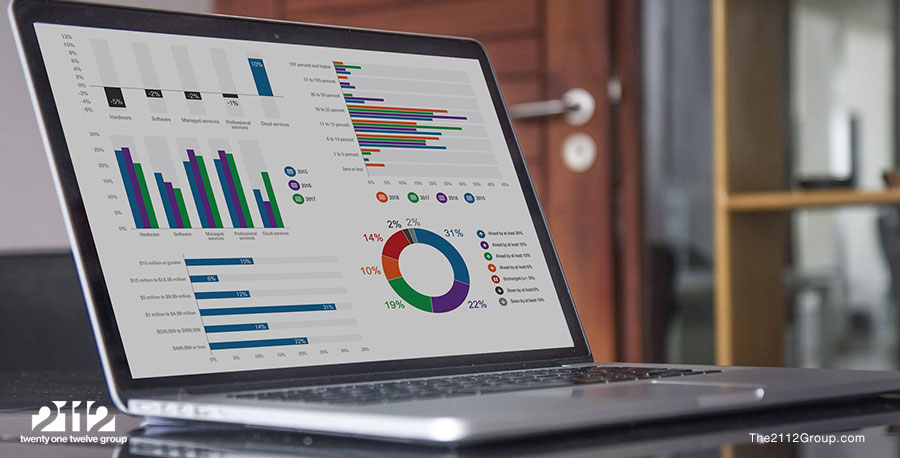 According to 2112’s annual Channel Forecast study and new Channel Chief Outlook report, vendors and partners are optimistic about growing sales in 2018. Yet the data suggests optimism shouldn’t come without concerns.

The recent volatility in the stock markets is enough to give anyone the jitters about how well the global and domestic economy will fare in 2018. When inflation rates climb, and stock prices tumble, discretionary spending – particularly on technology – usually slows.

The market is already shrugging off its historic correction numbers, and the official prospects are that the U.S. economy could grow as much as 5 percent this year. The global economy is on pace to grow better than 3 percent this year. And various market analysts forecast tech spending to increase somewhere between 3 percent and 5 percent over the course of the year.

The positive indicators are buoying the sales outlook of vendors and partners alike, according to a pair of research reports released by The 2112 Group.

In the new 2112 Channel Chief Outlook report, which measures channel performance from the vendor perspective, 62 percent of channel executives believe their indirect revenue generated by partners will increase by at least 20 percent or better.

The 2112 Channel Forecast and 2112 Channel Chief Outlook reports aren’t two sides of the same coin, as vendors and channel partners have different operating outlooks, constraints, missions, and expectations. As such, I’ll summarize the findings of the two reports independently.

The economic state of the channel is fine, but it could be better. Stability in the channel and a return to predictable annual growth rates of 15 percent or more will depend, in part, on how well partners get off the sidelines in the next 18 to 24 months in transformative areas such as cloud mobility, IoT, Big Data and business analytics, artificial intelligence and cognitive computing, and business automation.

Here’s where the channel risks becoming a population of haves and have-nots, with some partners making strong contributions to vendor profitability and growing their own businesses and others just opportunistically getting by month to month and year to year. For all of the promise we’ve noted this year of partners embracing cloud computing and recurring-revenue models and gearing up to tackle complex business services and workloads, the reality is that many are entering this world at a distinct disadvantage.

2112 believes the ongoing value of channel partners to both vendors and end users will rely, in large part, on how purposefully they restructure their businesses to execute against cloud and other recurring-revenue models. Those that embrace best practices and move ahead with strategic direction and forethought will be the ones delivering the best return to both ends of the channel value chain.

While the 2018 Channel Forecast reveals legacy partners in a state of transition, the report also lights the path to long-term success with insight into the motivations and adjustments necessary for success. As this transition continues, all sides can take heart; the channel continues to be a steady, viable route to market for technology products and services today and will remain so well into the future.

[ctt tweet=”Positive indicators are buoying the sales outlook of vendors & partners alike, according to a pair of research reports released by @The2112Group.” coverup=”UmdIp”]

Optimism prevails among channel chiefs, despite the many internal and external challenges in growing indirect revenue through channel partners. However, the sentiments expressed in 2112’s study show confidence in their business instruments, enablement programs, and support mechanisms in getting their jobs done.

2112 cannot understate the significance of vendors’ shift to services models. Vendors are increasingly looking at services models with recurring revenue as a means for introducing new products and services or evolving their existing models. In the next five years, most channel chiefs expect service providers – largely MSPs – to generate the bulk of their indirect revenue.

The shift to services is seen not just in which partners will generate revenue but also in the threats to the channel. Channel chiefs want and need partners to evolve their product portfolios, business models, and technology capabilities faster to meet the changing market demands and expectations. The concerns of channel chiefs aren’t unfounded. Partners are tepidly inching into the future, and failure to invest in new capabilities and models could put huge volumes of channel revenue at risk.

Channel chiefs and their vendors are investing in training programs and resources to encourage partner development and evolution, but the continued reliance on old-school incentives to drive partner behavior is somewhat concerning. Channel chiefs want partners to evolve their models, but the channel chiefs themselves aren’t showing signs of evolving their own models for incenting and rewarding partner evolution.

Provided the economy remains healthy and growing, channel chiefs may get rewarded for their optimism. By all indications, they’re making the right investments to drive the partner behavior that will result in the short-term growth they seek. The open question is whether these conventional investments will produce the long-term change they seek from their partners and reap the returns for their organizations.