5 of the Most Overhyped Channel Trends

5 of the Most Overhyped Channel Trends 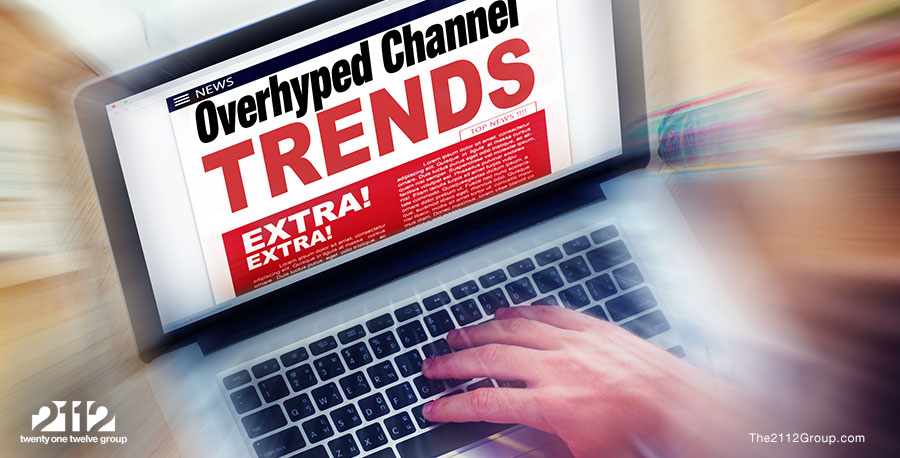 These trends and ideas are much discussed and unnecessarily generate a disproportionate reaction by channel chiefs.

I spend most of my days talking with people in and around the channel, so I frequently hear questions about the most burning issues facing it. Some people are just breathless about the impact of the hot trends in the channel today. Sadly, several of these most seemingly prescient trends are just hype, amplified by the continued attention to their already-exaggerated importance .

The following are the most overhyped trends in the channel today, and why you shouldn’t pay too much attention to them.

I’ve hit on this issue before, mostly because of the ambiguity of how people define and apply the concept of “partners emerging from the shadows.” As the proposition goes, shadow channels are new types of partners operating on the periphery that could potentially disrupt the traditional channel of resellers, managed service providers, and integrators.

Why this is hype: Well, because there’s no such thing as “shadow channels,” only channels. In fact, 2112 doesn’t describe the channel monolithically, with a capital “C,” but rather as a multiverse of channels that can include different types of partners, go-to-market models, and value propositions. Just because someone discovered a new type of partner doesn’t mean it never existed. In most cases, what’s being described as the shadow channel has existed for years, and in plain view.

Joe Panettiere of ChannelE2E does a great job of tracking mergers and acquisitions among partners. On some days, he reports three or four such M&A events, which gives people the impression that the channel is getting smaller. The perception of channel consolidation leads many program planners and managers to worry about running out of partners.

Why this is hype: In 2008, Gartner said cloud computing would wipe out 40% of the channel that simply couldn’t adapt to changing technology and business models. Earlier this year, Channel Partners numbered the North American channel population at approximately 126,000 businesses. Worldwide, there are somewhere north of 650,000 businesses operating in some “partner-like” capacity. Guess what? Those numbers haven’t shifted all that much in the past 15 years. Those are the same numbers I reported when I was the editor of VARBusiness (now defunct). If anything, the channel is getting larger through the expansion of partner types that cross over industries, as in the case of companies deploying industrial control systems that leverage the Internet of Things (IoT).

Concerns over the graying of the channel are similar to those over channel consolidation. A large number of gray-haired partners are approaching retirement age, and their children don’t want to take over the business. The fear is that these businesses will evaporate or consolidate, leaving vendors scrambling to cover their markets and customers.

Why this is hype: As noted in the previous discussion on consolidation, the net number of channel partners hasn’t changed much in the past two decades. However, few businesses – roughly 3%, according to 2112 research – will simply go poof in the night. Most of them will continue in some form – either through management buyouts or consolidation.

As more technologies transition to an “as-a-service” model, some people are questioning the ongoing need for distributors to act as the middlemen to the middlemen in the go-to-market equation. As the volume of hardware and software declines, so too will the value and viability of distribution. This perceived decline in value is what some people believe has led to consolidation in the distribution arena – with Tech Data buying Avnet, Synnex buying Westcon, and ScanSource buying Intellisys.

Why this is hype: As powerful as cloud computing is, every cloud and managed service requires hardware to operate. Distributors are proving quite adept at morphing to meet future cloud computing and service market needs. Ingram Micro, Tech Data, Synnex, and other distributors around the world have made substantial investments in cloud platforms that support and enable partners. And partners are showing their reliance on distribution to identify and deliver cloud services. Cloud computing is even birthing new types of distributors, such as Pax8. So, no, distribution isn’t going away anytime soon.

A good, loyal partner won’t abandon you in bad times. They’ll always lead with your products when approaching and servicing customers, and they’ll invest in your vision and future. Vendors that don’t have strong bonds with their partners risk instability in their channel programs and, worse, declining returns on their investment.

Why this is hype: As one channel chief told me, “If you want loyalty, get a dog.” Partner loyalty is a fleeting metric, as you can have scores of loyal and adoring partners that never turn a dollar. The job of a channel chief and program is to create a compelling economic opportunity for partners that makes them want to invest. 2112 has found that other factors such as ease of doing business, joint business planning and development, and effective demand generation have more of an impact on partner performance than a loyalty quotient. Partner loyalty could be a surrogate measure of satisfaction, but it’s not a goal to which channel chiefs should aspire.

Hyped trends and concepts aren’t unique, and there are many more to discuss. Send me your ideas about overhyped channel issues, and we can discuss them in a future 2112 blog.

Larry Walsh is the CEO of The 2112 Group, a business strategy and research firm servicing the IT channel community. He’s also the publisher of Channelnomics, the leading source of channel news and trend analysis. Follow Larry on Twitter at @lmwalsh2112 and subscribe to his podcast, Pod2112, on iTunes, Google Play, Spotify, and other leading podcast sources. You can always e-mail Larry directly at [email protected].