Inflation Impact on the Channel

Inflation Impact on the Channel 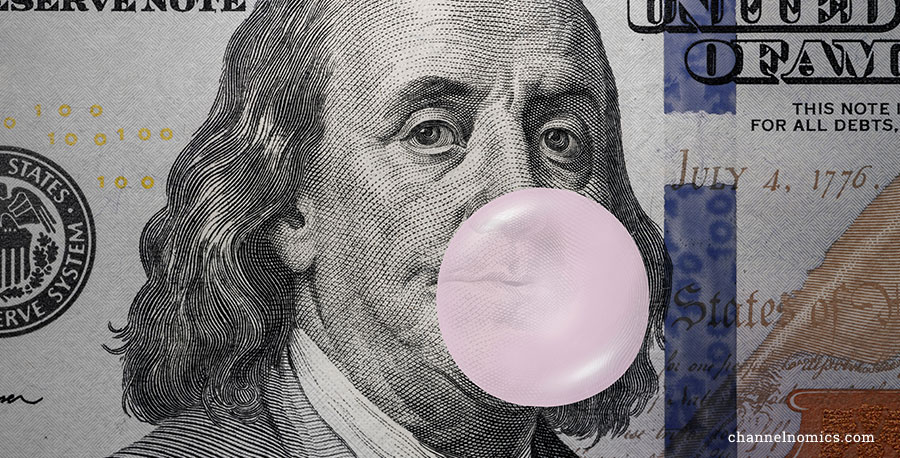 Rising prices will likely have a ripple effect through the channel, necessitating adjustments in strategies, programs, and partner relationships.

Inflation pressure is bound for the channel as component shortages, supply-chain bottlenecks, and high demand for technology products conspire to raise prices.

Over the past month, several major technology vendors – including Cisco, Dell, HPE, IBM, Lenovo, and Microsoft – announced price increases to offset the rising costs of components, manufacturing, shipping, and labor.

Prescriptions for economic recovery from the COVID-19 pandemic always included a healthy dose of inflation. Economists and government monitors predicted a short-term spike resulting from the release of pent-up demand as social distancing eased and life returned to normal.

Unfortunately, supply-chain issues and economic-stimulus packages continued by Western governments have created conditions in which inflation is thriving. According to the Wall Street Journal, the U.S. inflation rate for full-year 2021 will top 3.2% – more than a point higher than the Federal Reserve target. The long-range forecast is for inflation rates to remain at elevated levels through the end of 2023.

The downstream impact on the channel is predictable. As vendors increase prices, three things will happen:

A significant contributing factor to rising tech prices is chip shortages. When the pandemic first began, some companies, such as automakers and console makers, canceled orders for parts with computer chips, thinking sales would plummet. While this was true at first, sales quickly rebounded, with stronger-than-anticipated demand. By that time, however, multiple industries, including the tech sector, needed an increase in chip production. Demand outstripped capacity, and chip manufacturers around the world continue to struggle to produce enough product to fulfill orders.

The downstream effect in the channel: inventory shortages and delayed ship dates. Many vendors report product ship dates as far as six months from booking; some say they have to turn away orders because they can’t meet customer demand.

While chip manufacturers are ramping up production and manufacturing capacity, relief won’t come fast enough. The current forecast is for chip shortages to persist through the middle of 2022.

During the pandemic, governments around the world pumped trillions of dollars into their economies to aid displaced workers and sustain disrupted businesses. At the beginning of the year, the Biden administration released a third U.S. stimulus package – this one for $2 trillion – to keep money flowing to those in need. Meanwhile, the Federal Reserve and other central banks have poured more money into the global economy through quantitative easing and low interest rates.

The result is an oversupply of easily accessible and affordable money. The abundance of cash in the market is making it easy for businesses and consumers to purchase goods. Since most machinery and devices now include computing components, the demand is putting more pressure on technology vendors’ inventories.

The Federal Reserve is under pressure to raise interest rates to curb inflation. Raising interest rates when the economy is still recovering from the pandemic, though, could cause a stall, resulting in worse conditions. These opposing forces are creating uncertainty, which will likely make central banks and government treasuries reluctant to act.

Asia is the factory floor of the world. Over the past 20 years, global manufacturing shifted to China and other Far East countries. There’s high demand for shipping containers used to move product to consuming markets. Two problems are hampering the shipping industry: There aren’t enough containers, and the containers that are available are at the wrong ports.

As of June, Indian exporters to North America and Europe were struggling with the wait times to find a shipping container, saying the wait can be as long as three weeks. British exporters encountering the same issue are saying the container shortage has delayed shipments to East Asia by up to two months. As this all plays out, container prices have just about doubled. In addition, the container shortage has led to increased freight costs, which trickle down and result in higher prices for commercial and consumer goods.

The shipping industry is racing to add more capacity and containers to the supply chain. Nevertheless, shipping-industry analysts anticipate that the container shortage will persist through the middle of 2022.

The pandemic caused a surge in demand for endpoint devices and accessories as knowledge workers shifted to home and distributed offices. The re-opening of businesses created demand for more automation, new collaboration tools, and IT infrastructure refreshes. Vendors are struggling to keep up with demand for product, which is pushing prices higher.

This is what’s happening at several major IT vendors:

Effect on the Channel

Vendors and partners are mute on the impact that inflation and price increases are having on indirect sales. As several vendors reported, customer need and demand are high enough to keep orders rolling in. And thus far, customers are understanding of the fulfillment delays.

However, understanding and need will go only so far. Some vendors tell Channelnomics that they’re seeing customers buy lower-quality alternatives to satisfy their immediate needs. Calculating lost opportunity is challenging, but some channel chiefs suspect that the shift will dampen their revenue performance.

Also, price increases don’t necessarily translate into higher yields. Some vendors see as much as 80% of their channel sales go through nonstandard, or special, pricing, with discounts as deep as 65% on hardware and 80% on software. Channelnomics anticipates that both customers and partners will seek those generous discounts. For customers, it’s a matter of maintaining costs. For partners, it’s about preserving margins.

A potential gain for vendors is an increase in refurbished-equipment purchases. Unable to get new product, many buyers are turning to the refurbished market for the equipment they need. Refurbished products are highly profitable, but they don’t flow through many channel partners. The shift to refurbished product could cost some resellers opportunities.

Even without inflationary pressure on pricing, many vendors have been grappling with cutting costs in their go-to-market operations. An old trick for maintaining profitability and building market share is wringing cost out of product manufacturing by swapping out components for less expensive alternatives. Vendors say there’s little room for component cuts and the cost increases nullify the few opportunities. Because the go-to-market cost is in the channel, some vendors are looking at reducing their channel sales in favor of marketplaces and direct sales.

Based on economists’ forecasts, Channelnomics believes inflation will continue to pressure vendors and the channel for the next 18 months. Inflation pressures will increase friction between vendors and partners, each trying to maintain their revenue and margins amid variable demand by customers for products and services. The result will be an increasing need to adjust channel strategies and programs to compensate for the tensions, potential downturns in channel performance, and adoption of new routes to market.

Leora Schwadron is a staff writer at Channelnomics.