War Will Redefine the Channel Landscape

War Will Redefine the Channel Landscape 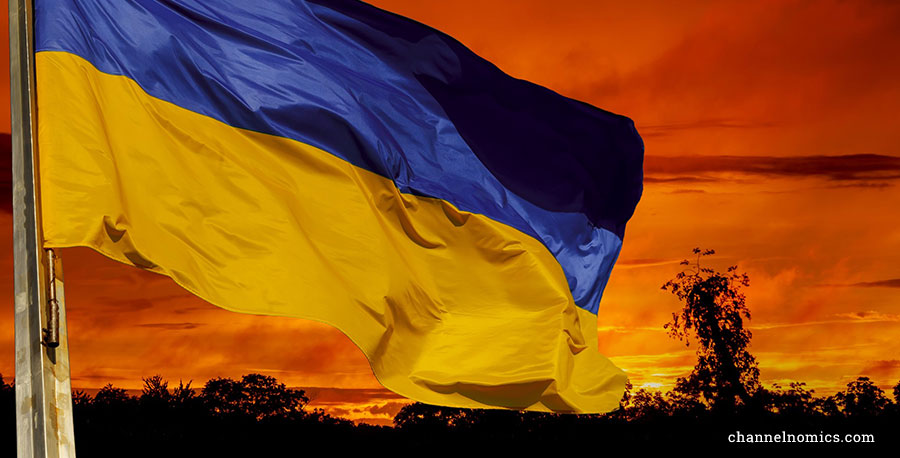 The Russian invasion of Ukraine has raised the prospects of a major war and global instability to levels not seen in decades; the unfolding events will reshape the global economy and technology channel.

Let’s not sugarcoat the issue at hand: The Russian invasion of Ukraine threatens to plunge the world into a new order that shatters our basic assumptions of security, prosperity, and future direction. Folks, this isn’t as bad it gets, but it’s only a few steps from it.

Around the technology industry and channel, leadership is grappling with the implications for operations, staff, partnerships, and customers. Several companies are trying to secure their people and assets in Russia and Ukraine. Planners are working to understand the implications of sanctions that will restrict commerce and finances in Eastern Europe. And everyone is trying to figure out how this conflict will impact already-strained supply chains.

These are still early days in the Ukrainian conflict. The fast-moving, fluid situation on the ground, the saber-rattling in Moscow, and the Western response to the crisis mean uncertainty is high – and will remain so. At Channelnomics, we see several ways this conflict is affecting, and will continue to affect, the technology industry and channel.

Last year, HP asked Channelnomics to produce a report on what the channel will look like in 2030. The HP team wanted to know how current events and trends would unfold through the end of the decade to inform thinking over the next several years. HP asked that we consider all factors – market conditions, societal trends, technology development, commerce models, and economic and political realities. HP wanted a comprehensive overview.

One of the factors we considered in our 10-year forecast was war. A string of regional wars and minor conflicts marked the time line between V-J Day in 1945 to the present. Major powers came close to engaging in direct hostilities only a handful of times. Every time something lit the fuse that would lead to World War III, diplomacy and calmer heads doused tensions. Until 1989, détente and mutually assured destruction (the MAD Doctrine) kept humanity from self-inflicted annihilation.

In the 30-something years since the end of the Cold War, the world’s lived in prosperity. China transformed from undeveloped into the world’s second-largest economy and factory floor. Europe coalesced into a powerful and prosperous economic union. The United States drove waves of technology innovation. And even countries of the former Soviet Union and Warsaw Pact created thriving economies. Our biggest worry was terrorism, not a nuclear holocaust.

Yet, over the past 10 years, the stress lines were becoming increasingly obvious. The endless war on terrorism took a toll on the U.S. Treasury and global prestige. Nationalism and extremism rose in governments around the world. New powers started flexing their muscles regionally. And grievances – both real and contrived – fueled tensions and mistrust.

In the Channelnomics Channel of the Future 2030 report, we took note of the rising tensions:

“[The] realignment of global power structures and waves of nationalism are increasing tensions among nations on regional and global levels. Those tensions create complications for businesses and consumers by disrupting the normal flow of goods and services, increasing costs, and creating uncertainty in business planning and channels. Tensions are likely to increase over the next decade as developing countries (China, India) assert themselves on the world stage, while established powers (USA, EU, Russia) attempt to maintain their positions.”

That was our way of saying we see a major war coming. If it doesn’t come across as pronounced, it’s because it’s not. We debated the crafting of this passage because of the pre-publication reaction we got to our inquiries about the possibility of dealing with a war.

Channelnomics reached out to several companies – including some that were in existence during World War II and had operations in Germany, Italy, and occupied Europe. No one wanted to talk about the prospects of war or how their companies would deal with the disruptions. The cold reception to our questions made us doubt the idea of including the possibility of major military conflicts in our future vision. After all, major war on the scale of what happened in the first half of the 20th Century is obsolete, right?

A week ago, Channelnomics started asking technology companies if they were making contingency plans in case the situation in Ukraine escalated to conflict. The initial response from many was that they had no operations in Ukraine, a small market, and thus limited exposure to the problem. Today, with fighting from Kyiv to the Baltic edge, everyone is speculating and planning for the consequences of the war expanding.

In the Channel of the Future 2030 report, we stated that the consequences of a major conflict would include significantly increased prices due to raw material shortages, uncertainty in supply chains and inventory planning due to shipping disruptions, steep commerce restrictions caused by economic sanctions, and limited access to markets in conflicted regions.

The best way of describing the current global economic situation is stressed. The COVID-19 pandemic is already disrupting supply chains. Component and raw material shortages have created order backlogs stretching beyond a year. And the current trend is de-globalization as countries and businesses recall their industries from offshore locations to bolster their economic security. The world has been pulling itself apart for some time; we’re just now realizing that it’s eroding our well-developed assumptions.

Technology companies in the beleaguered region are racing to protect their assets and people. One company told Channelnomics that it’s helping staff and their families escape Ukraine. Another company is looking to relocate its people stationed in Russia. Several companies are considering the war’s impact on their regional and global operations.

Sanctions against Russia and Belarus are biting into the regional and global economies. Russia is threatening to nationalize foreign assets in response to the economic restrictions imposed by Western countries. Nationalization means Western countries will lose their investments in Russia. More than 20 European airlines have shut their airspace to Russian carriers, which will make it difficult to get people in and out of Moscow, St. Petersburg, and other tech centers. And tech vendors and partners will lose touch with Russian distributors, which are essential for servicing and supporting this market.

European technology companies are taking stock of their new reality. Many European and American technology companies have development and support centers in Romania, Bulgaria, Slovakia, Hungary, Czech Republic, and Poland. Eastern Europe is still considered a “developing,” or “emerging,” market. Yet many vendors have vibrant and productive partnerships with distributors and resellers in the region. These countries make up the new front line. Vendors and partners are already starting to rethink how they operate given the disruption of nearby conflict and the threat of invasion.

The immediate global impact of the Ukrainian conflict is increased cybersecurity risk. The Russians and their digital civilian allies are prolific hackers and cyberwarriors. The Department of Homeland Security and European security agencies have already issued warnings to Western businesses to prepare for cyberattacks and collateral damage caused by malware spilling out of the combat zone. For security vendors and solution providers, though, the threat of cyberwar and the rapid proliferation of malware will be a boon to business.

The consequences of Russia’s actions will be felt for years to come. Europe depends on Russian fossil fuels for energy. Russia relies on Western imports of technology and finished goods for its domestic market. Democratic Europe is waking from its post-Soviet slumber and will re-arm for Cold War II. American policymakers will attempt to rewrite the geopolitical and economic lines with allies and nongovernmental agencies like the United Nations, World Bank, and International Monetary Fund. The world is changing – rapidly – before our eyes, even if without a global war.

In the short term, tech vendors and their partners are already reforecasting their sales targets and expectations for 2022. Security companies and their solution providers are racing to shore up digital defenses against cyberattacks and malware. Vendors should also review their legal obligations, redress their compliance framework to avoid sanctions conflicts, and develop messaging to partners about how the war will impact their business and ability to serve customers.

For the long term, American and European technology companies, as well as their distributors and partners, need to develop contingency plans. Contemplating the potential disruptions of war isn’t pleasant, but it’s necessary. Tech companies up and down the go-to-market chain can’t afford to wait for something to happen to make plans for securing people and assets, adjusting supply chains, and working around hot zones.

“The world faces a grave existential threat on a scale not seen in nearly eight decades.”

Regardless of what happens in Ukraine in the coming weeks and months, the world order is permanently altered. In the Channel of the Future report, we spelled out several market-level changes that would happen over the next 10 years: the eastward shift of the global economic center toward China, the realignment of supply chains, the adoption of new business models, and the potential for technological innovation.

The world faces a grave existential threat on a scale not seen in nearly eight decades. The technology industry and channel are more than just bystanders; they’re part of the first-line defense of territories, philosophies, and liberties. Whether we’re facing Cold War II or World War III, the tech industry and channel will play a significant role.