The Great Tech Exodus from Russia

The Great Tech Exodus from Russia

The list of tech companies leaving Russia is growing by the day. Here’s the latest.

In response to Russia’s illegal and unprovoked attack on the sovereignty and citizenry of Ukraine, U.S. tech companies from all parts of the industry have announced plans to suspend or cease operations in the world’s largest country and 11th largest economy.

Pressured by customers and/or investors, compelled by their own conscience, or simply concerned about their risk exposure in Russia, tech executives are moving quickly. Depending on their footprint in Russia and their specific tech innovations, they’ve suspended operations and sales, ceased shipments of products, and/or closed their doors.

For some, getting out is pretty straightforward. The Big Four management consultancies, which include EY and PwC, do business through affiliates in specific countries and can exit more quickly than companies like Cisco, which has committed more than $1 billion in foreign direct investment (FDI), opened a local office staffed with both Russian and non-Russian nationals, and established its Networking Academy program in the country.

Different technologies also present different challenges. Adobe, for example, said it will halt all new technology sales to Russia immediately. It also said that, to comply with sanctions from the European Union, United States, and United Kingdom, it will work to ensure that none of its products and services, including its widely used Adobe Creative Cloud, will be used by “prohibited entities,” which include government-controlled media outlets and defense departments. From a practical standpoint, fulfilling this commitment is a significant challenge in a country where software piracy, state-sponsored cyberterrorism, and clever workarounds are common. 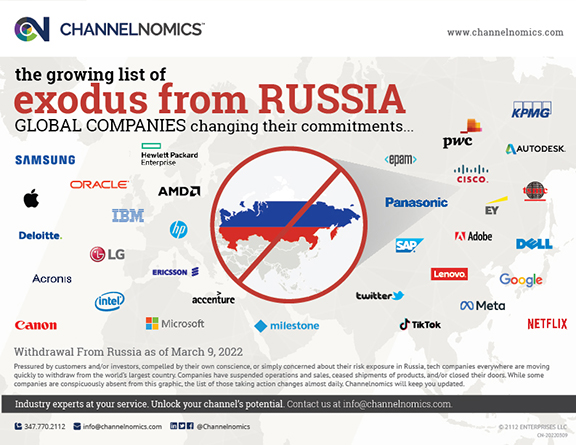 (For a more comprehensive look at which tech companies have announced plans to withdraw from Russia, be sure to download the Channelnomics “Exodus from Russia” infographic.)

Current events stand in stark contrast to what occurred just a decade ago, when many Western tech companies considered Russia the next great opportunity — right up there with Brazil, India, and China. Back then, “BRIC” nations offered untold promise to those willing to make a commitment to them. Now, most investments in Russia are looking to be a bust.

Even before the invasion of Ukraine, tech companies began to sour on Russia after encountering obstacles when doing business there. The list of difficulties includes securing access to some of the most common business requirements, including:

The Channelnomics Perspective
Channelnomics stands with tech companies that have pulled back from Russia. The compromise of a sovereign country’s right to integrity and self-determination, the gross use of power, and the unsubstantiated justifications for attacks deserve global condemnation.

Permeating all withdrawals from Russia is the specter of cyberterrorism, if not outright cyberwar. To many technology professionals, Russian cyberterrorists are as frightening as some of the nation’s missiles. While massive cyberattacks have yet to materialize, the world remains on high alert.

In the meantime, the tech community is moving quickly. Against such brutality, neutrality is not an option.

T.C. Doyle is the vice president of strategic content at Channelnomics. A renowned content creator, Doyle has spent the better part of the past four decades covering and commenting on the channel in different capacities. Follow him on Twitter at @tcdutah.