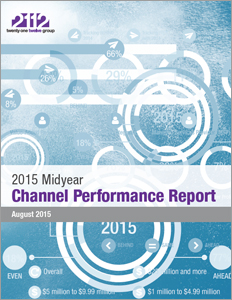 The 2112 Group polled solution providers about their sales, revenue, and profit trends for the first six months of 2015 and their expectations for the full year’s performance.

The overall IT market continues to grapple with disruptive and evolutionary forces. Many hardware and software vendors are struggling to replace commoditized-product revenue with that generated by services and the cloud. Some vendors are seeing their fortunes decline because their next-generation cloud products and services haven’t attained critical mass in the market.

Solution providers, too, are grappling with these forces, but seem to have found the right balance. Most of the companies in our 2015 Midyear Channel Performance Report identify as managed service providers (MSPs). Their growth is a result of high-touch interactions with customers, which lead to expanded engagements resulting in recurring and compound revenue.

In this report, 2112 details its findings from the 2015 Midyear Channel Performance study including some of the following highlights.

There are no reviews yet.